“Shinobu” means “forbearance” in Japanese. It symbolises the samurai spirit, which is not unlike the crafting of fine spirits, a process that requires time, patience and perseverance. These strong values are also embodied by Ken Usami, master distiller at the Shinobu distillery, and his Mizunara cask-finished range. The Shinobu Whiskies expressions are crafted by carefully selecting high-quality whiskies from various distilleries including Shinobu, which are first aged in old sherry and bourbon casks, and then finished in casks made of the precious Japanese Mizunara oak.

The Shinobu distillery is located in Japan’s beautiful Niigata prefecture, 300km north of Tokyo. The area is known for its “three white treasures”: snow, rice and sake. The distillery is home to a whisky lover and accomplished brewer, Ken Usami, who also founded the Niigata Beer craft brewery on the same site 20 years ago. A born innovator, Ken Usami was the first brewer to carry out a second fermentation and ageing in the bottle of a Niigata Beer. Today, his dream is to create a local whisky distillery that will showcase the quality of the region’s pure water and be enjoyed by spirits lovers around the world. In 2017, Ken Usami obtained the first whisky license for Niigata (another first!) and thus began his journey down the path to becoming a master distiller. While the distillery is still under construction, Ken Usami is experimenting by blending world whiskies to create flavours unique to Japan. Thus, the first expressions of whiskies finished in Mizunara oak were born.

Mizunara oak is one of the rarest and most prized types of oak in the world and native to the region. During the Second World War, Japan was economically blocked by many other countries so it could not import the oak barrels it needed for maturing whisky. These supply difficulties left the Japanese with no other option, they had to seek out the wood domestically. The Japanese whisky producers quickly turned to Mizunara oak that appeared to have all the right qualities. Mizunara trees are slow-growing and can often take 200 years to reach a suitable size (i.e. a trunk diameter of 70-80cm) for cask production. Mizunara oak is knottier than the other oaks used by coopers, has a higher water content (the clue is in the name “Mizu-Nara”, which translates as “water oak”) and is fairly porous. All of this makes Mizunara a tricky type of oak to work with, requiring a special expertise.

The terroir and the “three white treasures”

Its pure water springs and “three white treasures” make this region a unique place for the production of Japanese Whisky. Niigata is a Japanese prefecture located in the Chūbu region of Honshu. It is well known for its “three white treasures”, a reference to its snow, rice and sake, that enjoy an international reputation for their beauty and (for the latter two) their flavours. It is an environment that is naturally endowed with an exceptional source of pure water, which makes it the perfect place for brandy and whisky-making! In winter, the wind blows in from the sea over Niigata, bringing moisture and causing snow to fall on the nearby mountain tops. This snow gradually melts over the summer becoming the source of pure water for the local breweries and distilleries, an essential component in the crafting of a whisky. This results in a Japanese Whisky with a rare and unique expression! 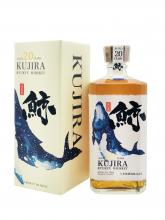